As a manager, I have always committed to getting employee performance reviews right. In an industry where the "resources" walk out to the parking lot every day, it just makes sense for the business. For me, while there's no escaping evaluating the individuals, it's been more the respect owed to them and helping them get to where they want to go in their careers. An employee who feels good about things is the one who helps the business get to where it needs to go. Because I agonized over them, my hope is that anyone I wrote a review for will remember an evaluation that reflected a lot of care and thought. Yes, even the ones I had to write next to an ocean while on vacation.

Where possible, I tried for these things:
These were then a basis for the conversations around the reviews. There have been some oddball reviews, such as the time I took over for a manager who departed suddenly right before annual reviews were due. And there have been (gratefully) a small number where things got bumpy. But for the most part, this was the basic pattern I tried to emulate.

But along the way, as I worked my way through different and changing companies and cultures, I started picking up a disconnect between my possibly idealized view and what was actually taking place around me.

So, it was with some sad resignation that I first read through the Businessweek column by Stanford Professor Jeffrey Pfeffer, "Low Grades for Performance Reviews." In that piece, Pfeffer runs through a litany of flaws of humans, the process, and the inherent problem of engendering competition between individuals. But after I got over the initial reaction of being bummed out, I began to wonder whether some measures were possible to address what he raised. For example, why would we not be able to educate managers to the potential for biases, such as higher scores for those they hired into the organization or with whom they had a common demographic? There is some precedence in California, for example, where training on discrimination is required for managers.

But when it occurred to me that this would take a certain kind of company culture and values to be able to pull this off, I got sort of bummed all over again. Given the current economy, priorities would seem to foster a workplace climate that likely has its sights elsewhere. On the other hand, though, it feels like the kind of company that would be able to rally around something like this might have a competitive advantage.

Some time later, I saw a presentation by Dan Pink, whose A Whole New Mind I'd recently referenced:


Pink contends that our motivation and reward system is set up for the mechanical, left-brain, linear worker. It works for if-then rewards with a clear set of rules. Pfeffer seemed to flirt with this insight with his suggestion to "make evaluation criteria more explicit and objective." The problem, according to Pink, is that this carrot and stick approach does not work for cognitive work (i.e., where the resources walk out to the parking lot every day). In fact, it dulls creativity and can do harm. Instead, what motivates these workers is not rewards, but autonomy, mastery, and purpose. In other words, the "Employee Performance Review" as commonly implemented will not improve performance.

Pink goes to great lengths to establish that this isn't just his opinion, but the result of research findings in the area. So, if we know this, why do we stay with it? He asserts that it's not uncommon to have a "mismatch between what science knows and what business does." That's something going on at two levels: the knowledge not making its way into business and/or business not acting on it even if it knows. Given the difficulty of change, I'd even lean toward the problem being so difficult to overcome, that we just make do with what we have, no matter how fundamentally flawed.

So maybe someone like Pfeffer will continue and help us get things to a better place. Until then, I am thankful that the core of what I've been doing over the years has some congruence with what Pink reports about motivation. Maybe at a minimum, we can adopt the spirit of the Hippocratic Oath of doing no harm. Hmm, shades of "Don't be evil."

Speaking of which, I wonder of there's a name for these Google ads oops. I'd previously cited one that had an unfortunate juxtaposition, and had this one pop up when I was looking for the Pfeffer column: 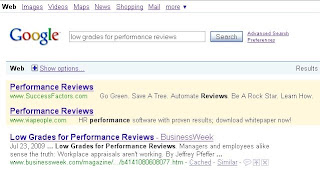