New Face of Leadership: the case for military experience 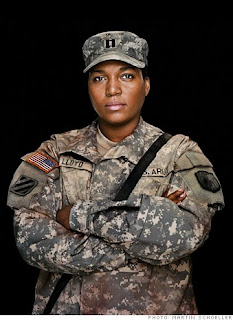 In the past year or so, I've become a fan of Fortune Magazine. I especially like some pieces that look at the people and story behind the headlines, such as the first-person article on the auto bailout. So, I was particularly taken by the "Battle Tested: from soldier to business leader" cover article recently, complete with full cover photo of one of the people in battle gear.

As you would expect from the title, the article sets out to connect applicability of military training to the skills and abilities needed in business. One of the first questions that came to mind even goes ahead of this: how does military training work for the military?

Most of those profiled in the article are West Point graduates, who upon graduation were Second Lieutenants and were in charge of a platoon. Think about that in business. A twenty-two year old whose first assignment is three to four teams, with each team having about a dozen members. I can't say that I've ever seen anything like that here in Silicon Valley, even during the bursts of growth and hiring. This is not the same as the recent graduate or even drop out who founds and grows a company. This is dropping someone into a fully developed organization and telling them to go run it.

So, how does it work in the military? I can't speak from first-hand experience. But with my father in the military, I do have some understanding of the kinds of behaviors expected. I value and respect what I was taught and what was modeled for me. No question about that. But even without the direct experience, it's easy to see how something like Boot Camp contributes to making this structure work.

But this doesn't get us an closer to the applicability of military training to business. It is this question that I was looking forward to in the Fortune article. More importantly, I was curious about how it works in the technology businesses that are here in Silicon Valley.

Before going any further, let's address one thing: real life and death. Again, no question. Anyone who can live through those experiences, have qualities that serve well in business or anywhere in life. My father in the jungles. A cousin wounded by a sniper. A college buddy showing me massive torso scars and telling me about a year rehabbing from his injuries.

While I remain a Fortune Magazine fan, I was disappointed because I did not get the take away I hoped for. The compelling connection between military experience and business leadership success was not made. Given those profiled, it does not establish the difference between this route to business and anyone from a highly regarded university, some of whom have gone through special programs such as the Pepsi Leadership Program cited. Some of those profiled said they have leadership skills, which is certainly true given that they started out with a staff of 40-50, which grew to upwards to 200 by the time they reached the rank 0f Captain. But is this intrinsically tied to a military grounding or could the same be said of anyone who again went to a good school and worked up to managing large teams?

The roles tended to be in areas that might be more akin to the personnel and lines of work that you could see connected to the military. These included Walmart store management and drilling safety system construction. And they are doing graduate business work. In other words, they will have undergraduate degrees from a strong university and an MBA. This would seem to be a strong combination in its own right for business success.

What about the Silicon Valley connection? There is one attempt, when a former officer now working for Google is asked about leading "eccentric" programmers. The response is that "in his experience Silicon Valley is dubious about any sort of leadership paradigm and skeptical of structure." He adds that those in the military doing interesting things have an "entrepreneurial in mindset." But again, this might be said about others elsewhere, like a dorm room.

I wonder whether this was an assigned story, and the writer was giving it his best shot. But in the writing, he discovered that the proposition is no more than the person being successful in business and just happening to have a military background.

With this posting, I realized that I've spent more time thinking about government and the country than I have for a long time. I was riveted by the proceedings of the Health Care Reform voting. I attribute it to the country's current administration. That "Hope" thing is working, at least for me.