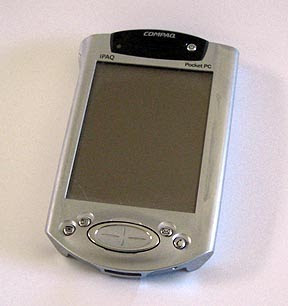 Knowing the "Crossing the Chasm" guy, Geoff Moore, comes with a lot of good stuff. He's a great guy, funny and, of course, serious smart. Over the years, it's always something to get his read on things and just kick things around.

He's also generous, so I've benefited by getting the stuff he didn't need. In one World Economic Forum he participated in, Bill Gates was giving out PocketPCs, which resulted in a Compaq iPAQ 3850 trickling down to me.

I used this particular one in some product development. The PocketPC was at that historical juncture just before phones started becoming more capable. The roaming connectivity was Wi-Fi, which is what we were trying to use as a base at BravoBrava!, the technology incubator I was with at the time. The company itself is an interesting story. It was created when SRI was going to shut down its speech lab. Instead of letting everyone get dispersed, Joe Costello took the staff and set up the company. One of the companies that was spun off was Orb Networks. I worked with some of that product's early precursors, looking to get the user experience improved. The metaphor at the time was "friction" and trying to reduce the amount of friction in the experience. This included getting Wi-Fi set up in homes and teaching users about interacting with the PocketPC. When it's young and the parts are not ready, it's hard to get past the early adopters. Which, of course, brings us full circle to the Chasm guy.

Comments:
Hey! SRI was not going to shut down the speech lab! Joe just picked up some who were planning to leave because they wanted to do more applied things. And I was the only speech technology person.. the rest were top notch programmers and HCI folks...

Hey, Patti. Thanks for the clarification.